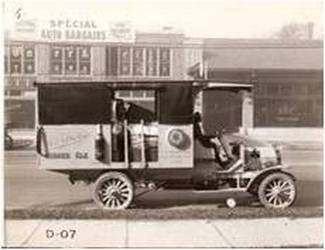 Have you ever taken a drink of ginger ale and had to cough or sneeze before it ever hit your lips? That's Vernor's Ginger Ale. It has that sparkling fizz, the unique taste, and a history that goes back before Coca-Cola, Pepsi, Hires or Moxie. Vernor's is Detroit's Drink, and it's the oldest continuously produced soda pop in America.

Detroiters remember the huge illuminated sign on the river, the gnome, Boston coolers, Cream-Ales, hot Vernor's, and waiting for the Bob-lo boat at the soda fountain at the foot of Woodward. If you don’t remember those, you may remember the “new” bottling plant built in 1954 at Woodward and Forest. It had the huge neon sign with the gnome pouring a bottle of Vernor’s.

The Bob-lo boats are gone. The huge sign and the fountain at the foot of Woodward are gone. Vernor's has gone through a series of owners since 1966 and is now owned by Keurig Dr Pepper in Plano, TX. Yet, Vernor's Ginger Ale is still Detroit's Drink. And when you open a Vernor's, there's still that sparkling fizz and unique taste that created a sensation when it was first introduced to the public in 1866.

Over 150 years ago, James Vernor served the first glass of Vernor's in his pharmacy at 235 Woodward Avenue. The story of James Vernor is as complex and interesting as the secret formula for the soda. James Vernor was not just a man who invented a soft drink. He was a leader and one of Detroit's most admired citizens.

Higby and Sterns' Drug Store was young James Vernor's first good job as an errand boy. He began working there in 1858 with all the spirit and enthusiasm that a 15-year-old would have. He made quite a name for himself due to his parcel wrapping and fast deliveries. He was soon promoted to the position of Junior Clerk.

Vernor stayed with Higby & Sterns until the age of 19, when he enlisted in the Fourth Michigan Cavalry. In July of 1865, he was discharged and returned home to Detroit. Almost immediately after his return home, he opened a drug store at 235 Woodward on the southwest corner of Woodward and Clifford. Vernor was admired as a pharmacist. He closely scrutinized his prescriptions for quality, accuracy, and possible drug interactions. Vernor was meticulous about his work. Everything he did needed to meet his high standards. He served on the State Board of Pharmacy for eight years and was one of the driving forces to pass the state's first pharmacy law. He held Michigan's pharmacy license #1 all the years he practiced.

Like all good pharmacists, Vernor also had a soda fountain in his drug store.

There are conflicting stories about how the ginger ale first began. The most popular story, and one found frequently in the Vernor's Company's own literature, says that Vernor began experimenting with a formula for ginger ale prior to leaving for the Civil War. Upon returning from the war, he opened a wooden cask of his extract and found the taste he had been hoping to discover. The secret combination of ingredients, along with the four years of aging in wooden casks during the Civil War, perfected his ginger ale. Another story says he began experimenting with his formula after returning from the war.

At the age of 84, James Vernor died. The Vernor family was once asked when the first Mr. Vernor retired from business. The answer was, "A few hours before he died." He was a hard-working and energetic man. One that made his mark on the city of Detroit with both business and civic contributions.

The second James Vernor came into the business as early as he could, working alongside his father in the old drug store. In the beginning, the father and son team were the only employees. They often worked 16 hour days together washing bottles, making and bottling the ginger ale, delivering it to various sites in the city, and taking care of clerical duties. He was born in Detroit on March 25, 1877. It wasn't until his father died in 1927, though, that he became President of the James Vernor Company. It was in a great way due to the second James Vernor's influence and style that the company grew into an international organization. In 1896, James Vernor II entered the business and his father decided to concentrate full time on ginger ale.

The drug store was closed in 1896 and a small plant established at the foot of Woodward Avenue, several blocks from his former drug store's location. The plant was devoted to the blending, aging, and bottling of Vernor's Ginger Ale. Also that year, a horse and light wagon were purchased for distribution purposes.

Vernor's grew as Detroit grew. The next 20 years would see tremendous expansion of the plant and distribution area. Picture the scene; the foot of Woodward was the location of the docks for commuters taking ferries to Windsor, Canada, and the Bob-lo and Belle Isle boats. Excursion boats also docked nearby. Thousands of thirsty passengers stopped daily at Vernor's fountain for a refreshing taste of ice cold Vernor's Ginger Ale. Vernor's huge illuminated sign lit up the waterway between two nations, and the skyline of a major city.

The demand for Vernor's was huge. Every first class drug store in Detroit installed dispensing equipment specifically to serve Vernor's. Hospitals began utilizing it more and thousands of cases were being delivered to homes. The same standards that had been applied to the consistency of his prescriptions were applied to the consistency of Vernor's Ginger Ale. The water had to be specially purified. The blending needed the finest Jamaican Ginger distilled in the absolute proper proportion with other fruit juices. Even the carbonic gas used was produced by Vernor so it would meet their requirements.

It was about that time that the two Vernors decided a great way to expand the business even more would be to produce the extract for sale to franchise holders. The expansion of their plant illustrates how successful this idea and strategy was. In 1918, Vernor purchased the old Riverside Power Plant. In 1919 a six story main building was erected adjacent to the other two. In 1939, the 10-story Siegel building was purchased and renovated. In 1941, the "most modern bottling facility in the world" was completed at 239 Woodward Avenue.

The plant also had a spectacular soda fountain. Everyone who lived in Detroit in the 1940's and 1950's has a story about going to the Vernor's soda fountain, usually before or after a ride on the Bob-lo Boat. One of the favorite drinks to have was a Boston Cooler. The drink is a milkshake-like mixture of Vernor's and vanilla ice cream. Contrary to many incorrect web sites, the Boston Cooler is not named after Boston Boulevard in Detroit. At that period of time, any soda pop mixed with ice cream was called a Boston Cooler. So, you could have a Hire's Boston Cooler or a Vernor's Boston Cooler. Vernor's copyrighted the name in the late 1960’s.

The James Vernor Company had always been a family owned company. The death of James Vernor II in 1954 forced the company to sell some stock to the public. In 1957, James Vernor III died. His majority ownership of Vernor’s went through a court battle and was ultimately sold to investors. As a result, Vernor’s was no longer in the hands of the founding family. Vernor's became Vernors in 1959. (Note the lack of the apostrophe between the 'r' and the 's'.)

Vernor Davis had been with the firm since 1931. Prior to the death of his uncle, he became president of the company, in 1952. James Vernor III was concurrently named vice president. Under Davis' leadership, company sales grew tremendously. A stockholder's annual report from 1963 indicates sales grew from just over $6,000,000 in 1961 to over $9,000,000 in 1963.

In 1966, the one hundredth birthday of the James Vernor Company, Davis became chairman of the board. That same year, Vernors was sold to another group of investors, members of the New York Stock Exchange. The company would soon go through a number of different owners.

Again in 1971, Vernors was sold to American Consumer Products. By 1979, another company, United Brands, owned Vernors. This ownership would be the one most costly to the City of Detroit. In January of 1985, Cincinnati-based United Brands abruptly ended bottling operations at the plant.

The property was purchased in 1986 by Shula Associates, who had plans to knock it down for a shopping mall. The plant was eventually demolished in 1987. A high-rise apartment building for Wayne State University is now on the Cass Avenue side of the site. On the Woodward frontage, a four story apartment complex with first floor retail space has been built. The property is directly north of the Whitney Restaurant and two properties north of Hop Cat Detroit.

Just two years after abandoning Detroit, United Brands sold Vernors to A & W Brands. All of A & W was subsequently purchased by Dr. Pepper/Cadbury in 1993. In 1996, Dr. Pepper/Cadbury merged with 7UP and moved to Plano. Cadbury continued to own Vernor's until stock holders made the candy company give up the beverage firm. Dr Pepper Snapple was born! The company merged with Keurig and is now Keurig Dr Pepper. The company has been very supportive of the Vernor's brand.

Even with all the changes, all the owners, and the closing of the bottling plant; Vernors remains Detroit's Drink. Possibly be cause of the plant closing, interest in Vernors has grown. Once something you have taken for granted is gone, people become interested again. The rescue effort of the Vernors mural in Flint is a good example of this interest. Several painted Vernor’s advertisements have also been renovated or created in Detroit.

There is also a small group of Vernors collectors (including this author!) who regularly pursue the history of Vernors Ginger Ale through its advertising. From many points across the United States, this group of collectors is bringing back to the Detroit area pieces of Vernors' past before they are lost forever.

The plant is gone. The huge illuminated sign is gone. The fountain at the foot of Woodward is gone. But, many Detroit hearts are warmed with the fond memories of a man, his ginger ale, and the mark he left on his city.

Keith Wunderlich has been an avid Vernor's Ginger Ale collector for over 40 years. If you have any Vernor’s advertising you’d like to sell or want appraised, he can be contacted at: vernorsclub@yahoo.com. The Vernor’s Collector’s Club website is: www.VernorsClub.weebly.com